Kelly Preston was an American actress and former model born in Honolulu, Hawaii. She appeared in several television serials and films. Her well-known films include Jack Frost, The Last Song, For Love of the Game, Old Dogs, Broken Bridges, Jerry Maguire and Mischief. Born Kelly Kamalelehua Palzis on October 13, 1962 in Honolulu, Hawaii, to Linda Carlson, she belongs to English, Irish, German, Scottish, and ‘about 1/32 Hawaiian” descent. She was discovered by a fashion photographer when she was 16. She attended Pembroke School in Adelaide, South Australia and graduated from Punahou School in Honolulu, Hawaii. She studied drama at the University of Southern California. She married John Travolta in 1991. They had three children: Jett (1992–2009), Ella Bleu (born 2000), and Benjamin (born 2010). She was previously married to Kevin Gage. On July 12, 2020, Preston died after two years of treatment for breast cancer; she was 57. 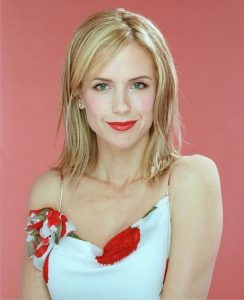 Kelly Preston Facts:
*She spent most of her growing years in Iraq.
*She is stepdaughter of Lee Carlson and older stepsister of Chris Palzis.
*She was discovered by a fashion photographer when she was 16.
*She was in a relationship with George Clooney from 1987 to 1989 and Charlie Sheen from 1989 to 1990.
*She died of breast cancer in July 2020.
*Visit her official website: www.kellypreston.com