Meryl Davis is an American ice dancer. She is the 2014 Olympic champion, the 2010 Olympic silver medalist, a two-time World champion, winner of five Grand Prix events, three-time Four Continents champion and six-time U.S. national champion. She was teamed up with Charlie White in 1997, by her coach, Seth Chafetz. She won the 18th season of Dancing with the Stars along with Maksim Chmerkovskiy. Born Meryl Elizabeth Davis on January 1, 1987 in Royal Oak, Michigan, to Cheryl and Paul D. Davis, she was raised in West Bloomfield Township, Michigan. She has one younger brother named Clayton, and belongs to Irish, English, German and Scottish descent. She started skating at the age of five. She is majoring in cultural anthropology at the University of Michigan, and also studying Italian. On July 16, 2017, she got engaged to figure skater Fedor Andreyev, whom she had been in a relationship for three years. 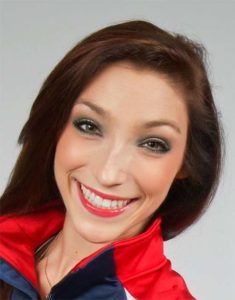 Meryl Davis Facts:
*She was born on January 1, 1987 in Royal Oak, Michigan, USA.
*She is of Irish, English, Scottish and German descent.
*She was diagnosed with dyslexia in the 3rd grade.
*She has been skating since the age of five.
*She and Charlie White have skated together since 1997.
*She won Season 18 of Dancing With the Stars with partner Maksim Chmerkovskiy.
*Follow her on Twitter, Facebook and Instagram.