Laura Vandervoort is a Canadian actress. She is best known for television roles as Sadie Harrison in the CTV teen drama series Instant Star, Arla “The Bolt-Gun Killer” Cogan in the Syfy supernatural drama series Haven, Kara Zor-El (Supergirl) in The CW serial drama series Smallville, and Lisa in the ABC science fiction series V. She portrayed Elena Michaels in the Space drama series Bitten from 2014 to 2016. In addition to her television appearances, she has also acted in a number of films, including This Means War, Ted, The Entitled, and Jigsaw. Born Laura Dianne Vandervoort on September 22, 1984, in Toronto, Ontario, to Dutch father and Canadian mother, she has a sister named Sarah. She attended York University for Psychology and English majors. She began her career at the age of 13, appearing on commercials and doing background work in Canadian television series and film. In February 2014, she got engaged to Oliver Trevena, but they broke up in March 2015. Previously, she was in a relationship with Corey Sevier. 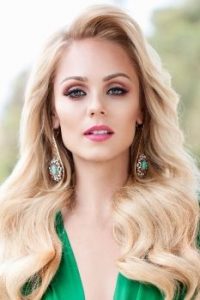 Laura Vandervoort Facts:
*She was born in Toronto, Ontario on September 22, 1984.
*While growing up, she played baseball, basketball, football, gymnastics, karate, and tennis.
*She has second degree black belt in karate.
*She ranked #53 in 2010 and #73 in 2011 in Maxim’s Hot 100 Women in the World editions.
*She was once engaged to Oliver Trevena (February 2014 – March 2015).
*Visit her official website: www.lauravandervoort.com
*Follow her on Twitter, Facebook and Instagram.