Meyers Leonard is an American professional basketball player who plays for the Miami Heat of the National Basketball Association (NBA) at the Power forward / Center position. He played college basketball for the Illinois Fighting Illini before being selected by the Portland Trail Blazers with the 11th overall pick in the 2012 NBA draft. After spending his first seven seasons with the Trail Blazers, he was traded to the Heat in the 2019 off-season. 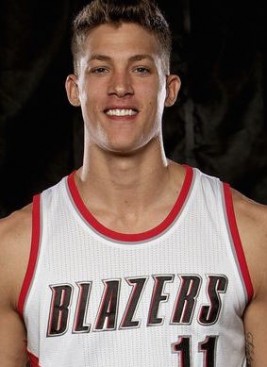 Born Meyers Patrick Leonard on February 27, 1992 in Woodbridge, Virginia, to parents Tracie and Jim Leonard, he has two older brothers named Bailey and Chris. Leonard was educated at Robinson High School and University of Illinois at Urbana-Champaign. He played shooting guard during his sophomore year of high school. He was chosen five selections after Trail Blazers teammate Damian Lillard in the 2012 NBA Draft. He has been married to Elle Bielfeldt since 2015.

Meyers Leonard Facts:
*He was born on February 27, 1992 in Woodbridge, Virginia, USA.
*His father James, a golf pro, was killed in a freak bicycle accident when Leonard was six years old.
*He began his career with the Portland Trail Blazers in 2012.
*He was an Honorable Mention All Big-10 selection at Illinois.
*His dog Bella died of cancer in December 2017.
*Follow him on Twitter and Instagram.