Mia Korf is an American actress who was cast as the original Blair Daimler Buchanan on the ABC daytime drama, One Life to Live. Her other television roles include Players, Party Of Five, “Danny,” Becker, North Shore, Hawaii, NYPD Blue, Chicago Hope, Nip/Tuck, The Agency, Crossing Jordan, Strong Medicine, Cold Case, and Eli Stone. She has also appeared in the films Blood Brothers and Jerry Maguire. She is also notable for voicing Theresa Cook in W.I.T.C.H., in D is for Dangerous, K is for Knowledge and P is for Protectors. Born Mia J. Korf on November 1, 1965 in Ithaca, New York, to an architect/artist mother and a university professor father, her mother is of Japanese ancestry and her father, mycologist Richard P. Korf, is of European ancestry. Korf was educated at Ithaca High School and Cornell University. She started her career in television in 1990 playing Dr. Kim Rosenthal on the NBC series The Days and Nights of Molly Dodd and on the soap opera, Loving. She was married to actor Jeffrey Lebeau from 1991 to 2010. 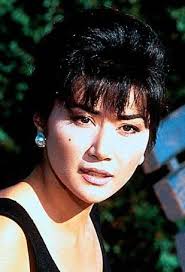 Mia Korf Facts:
*She was born on November 1, 1965 in Ithaca, New York, USA.
*She is of European descent on her father’s side, and of Japanese descent on her mother’s side.
*She originated the role of Blair Daimler Buchanan on One Life to Live.
*She currently resides in Los Angeles.