Michael Buble is a Canadian singer, songwriter and actor who rose to international fame for his 2005 album, It’s Time. His #1 albums on the Canadian and U.S. charts include: Call Me Irresponsible, Crazy Love, and Christmas. He has won several awards, including four Grammy Awards and multiple Juno Awards. His first album reached the top ten in Canada and the UK. Born Michael Steven Bublé in Burnaby, British Columbia, Canada, he is the son of salmon fisherman Lewis Bublé and Amber. He has two younger sisters, Brandee, and Crystal, an actress. He has been married to Argentine actress Luisana Lopilato since 2011. They have two sons named Noah and Elias. 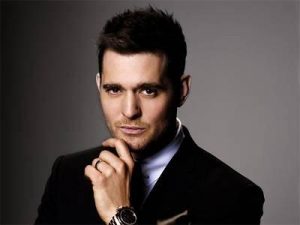 Michael Buble Facts:
*His father Lewis is a salmon fisherman and his mother, Amber, raised him and his two younger sisters.
*He has dual Italian-Canadian citizenship.
*He was raised Catholic and slept with a Bible.
*Follow him on Twitter, Facebook, Google+, YouTube, and Instagram.