Argentine professional footballer Lionel Messi was born as Lionel Andrés Messi in Rosario, Santa Fé, Argentina, where his mother (Celia Maria) was employed as a part-time cleaner and his father (Jorge Horacio Messi) was a factory steel worker. Messi plays as a forward for Argentina national team and the Ligue 1 club Paris Saint-Germain, and is considered one of the world’s greatest footballer. He is the only player to win five FIFA Ballons d’Or. He has three siblings, a sister, Maria Sol, and two elder brothers Rodrigo and Matias. He married Antonella Roccuzzo in 2017. They have two sons: Thiago and Mateo. 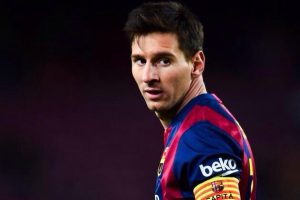 Lionel Messi Facts:
*He started playing football for a local club, Grandoli at age 5.
*He began his professional soccer career at the age of 17.
*He is the second Argentine to win a Ballon d’Or. The first being Alfredo Di Stéfano.
*At 22 years old, he won the Ballon d’Or and FIFA World Player of the Year.
*He is the only footballer in history to win the FIFA Ballon d’Or four times, all of which he won consecutively. (2009, 2010, 2011, 2012)
*He became the first player in Champions League history to score five goals in a single match. (2012)
*At 25, he became the youngest player to score 200 La Liga goals.
*Soccer great Diego Maradona has declared Messi as his successor.
*He was diagnosed with a growth hormone deficiency as a child. At age 13, he relocated to Spain to join Barcelona, who agreed to pay for his medical treatment.
*His first contract with Barcelona was detailed on a napkin.
*He got red card during his international debut.
*Japanese jeweler created gold replica of his left foot.
*He is often compared to Maradonna in terms of his style of play.
*One of his favorite fellow football players is Argentinian Pablo Aimar.
*He met Antonella when he was only 5 years old.
*He enjoys playing video games.
*He admits that his favorite thing in life is sleeping.
*Website: www.messi.com
*Follow Messi on Twitter, Facebook, YouTube, and Instagram.