Michele Bachmann is an American politician who is the founder of the House Tea Party Caucus. She is a former Republican Congresswoman from Minnesota’s 6th Congressional District, and was the 2012 GOP presidential candidate. Born Michele Marie Amble in Waterloo, Iowa, she is the daughter of Jean Amble and David John Amble. She has three brothers, Gary, David and Paul Amble. She has been married to Marcus Bachmann since September 10, 1978. They have five children: Lucas, Caroline, Elisa, Sophia, and Harrison. 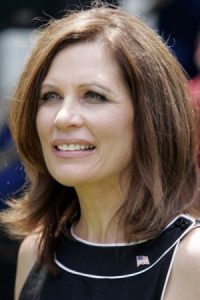 Michele Bachmann Education:
Graduated from Anoka High School in 1974.
Attended and graduated from Winona State University with a B.A. in 1978.
Earned a J.D. degree from Oral Roberts University in 1986.
Earned an LL.M. degree in tax law from the William & Mary Law School in 1988.

Michele Bachmann Facts:
*Her parents divorced when she was young.
*She babysat Gretchen Carlson, when she was a young girl.
*She was the 2012 GOP presidential candidate.
*She is the founder and chairwoman of the House Tea Party Caucus.
*Follow her on Twitter and Facebook.