Michelle Dewberry is a British businesswoman, politician and media personality who won the 2006 series of BBC One’s The Apprentice. She received a £100,000-a-year job working for businessman Alan Sugar. Dewberry published her autobiography, Anything is Possible in 2007, and joined the magazine Business Matters as a monthly columnist in December 2009. In 2016, Dewberry appeared on ITV gameshow The Chase alongside musician Shaun Ryder and Olympic ski jumper Eddie Edwards. Born Michelle Louise Faye Dewberry on October 9, 1979 in Kingston upon Hull, United Kingdom, to parents Glynis Davies and Dave Dewberry, she has a sister named Fiona. She was in a relationship with fellow Apprentice contestant Syed Ahmed during and after The Apprentice. However, they broke up in late 2006. 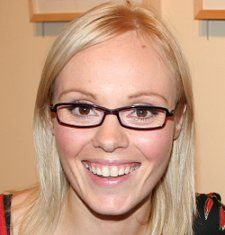 Michelle Dewberry Facts:
*She was born on October 9, 1979 in Kingston upon Hull, United Kingdom.
*Her full name is Michelle Louise Faye Dewberry.
*She won the second series of British television programme The Apprentice.
*Other candidates were Ruth Badger (Runner-up), Ansell Henry, Paul Tulip, Syed Ahmed, Tuan Le, Sharon McAllister, Samuel Judah, Jo Cameron, Mani Sandher, Alexa Tilley, Karen Bremner, Nargis Ara, and Ben Stanberry.
*She started a business consultancy in 2006.
*She appeared on BBC’s Question Time in April and October 2017.
*She became a host of The Pledge on Sky.
*She is an ambassador for Women’s Aid and The Prince’s Trust.
*Visit her official website: www.michelledewberry.com
*Follow her on Twitter, Facebook and Instagram.