Joaquin Phoenix is an American actor. He is best known for his roles in the films Gladiator, Walk the Line, The Master, Joker, Two Lovers, Her, You Were Never Really Here, Buffalo Soldiers, Inherent Vice, and The Immigrant. Throughout his career, Phoenix has received numerous awards and nominations, including one Academy Award, one British Academy Film Awards, two Golden Globe Awards, and one Grammy Award. Born Joaquin Rafael Phoenix on October 28, 1974 in San Juan, Puerto Rico, to parents Arlyn Phoenix and John Lee Bottom, he is the brother of Liberty Phoenix, River Phoenix, Rain Phoenix, and Summer Phoenix. His ancestry includes English, German, French, and Jewish. Since late 2016, he has been dating American actress Rooney Mara, his co-star in Her, Don’t Worry, He Won’t Get Far on Foot, and Mary Magdalene. In July 2019, it was confirmed that they are engaged. He was previously in relationships with Liv Tyler, Allie Teilz and Topaz Page-Green. 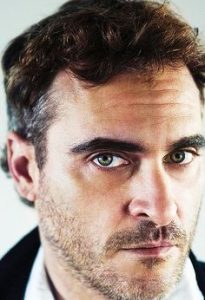 Joaquin Phoenix Facts:
*He was born on October 28, 1974 in San Juan, Puerto Rico.
*His mother Arlyn Phoenix named him Leaf Phoenix.
*He started his career performing as a child on television.
*He has been nominated four times for the Academy Award, winning once in 2020.
*He won the Academy Award for Best Actor for his starring role in the 2019 film Joker.
*He has been a social activist for a long time, especially for animal rights.
*He is a vegan.
*He supported Bernie Sanders in the 2016 U.S. Presidential election.
*He is close friends with Vince Vaughn, Matt Damon, Keanu Reeves and the late Heath Ledger.