Michelle Kwan is an American former competitive figure skater who is a two-time Olympic medalist, a five-time World champion and a nine-time U.S. champion. She is the most decorated figure skater in U.S. history. Born Michelle Wingshan Kwan on July 7, 1980 in Torrance, California, to parents Danny and Estella Kwan, she is the youngest of three children. Kwan began skating when she was five after watching her brother play hockey. She started competing at age seven. In January 2013, Kwan married her boyfriend of 21 months Clay Pell following a 4-month-long engagement. 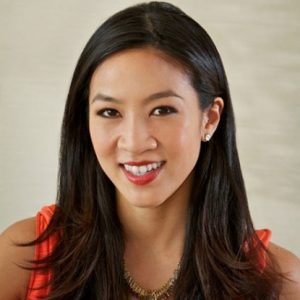 Michelle Kwan Facts:
*Born on July 7, 1980 in Torrance, California, she grew up speaking both Cantonese and English at home.
*She began skating when she was five, and won the world junior championship in 1994.
*At age 13, she finished eighth in the 1994 World Championships.
*At age 15, she became world champion in 1996.
*She is a five-time world champion figure skater and two-time Olympic medalist.
*People Magazine named her one of the top 50 Most Beautiful People in the World in 2000.
*She retired in 2006.
*She has a wax statue of herself at The New York Madame Tussaud’s Wax Museum.
*Follow her on Twitter and Instagram.