Michelle Phan is an American beauty YouTuber, makeup artist, model, and entrepreneur. She is best known for her makeup tutorials videos on her YouTube channel ‘michellephan’, where she has more than 8.9 million subscribers and growing. In 2011, she co-founded Ipsy with CEO Marcelo Camberos and president Jennifer Goldfarb and has her own cosmetic line called em by Michelle Phan. She provided the voice of Jessica Jones in the mobile game Marvel Avengers Academy in 2016. Born on April 11, 1987 in Boston, Massachusetts, she was raised by a single mother. She has an older brother named Steve and a younger half sister named Christine. She was educated at Tampa Bay Technical High School in Florida and attended Ringling College of Art and Design and Massachusetts College of Art and Design. In 2010, she began dating model, and dancer Dominique Capraro. 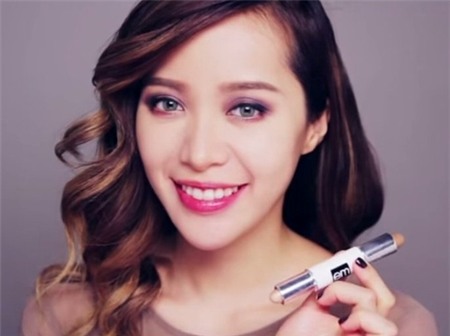 Michelle Phan Facts:
*She was born on April 11, 1987 in Boston, Massachusetts, USA.
*She is of Vietnamese descent.
*She is a pioneering Beauty YouTuber.
*She published her first YouTube video about a makeup tutorial in May 2007.
*Co-founded Ipsy with CEO Marcelo Camberos and president Jennifer Goldfarb in 2011.
*She launched a cosmetic line called em by Michelle Phan in partnership with L’Oreal in August 2013.
*She released her book Make Up: Your Life Guide to Beauty, Style, and Success — Online and Off in October 2014.
*She made two Lady Gaga makeup tutorials, based on Gaga’s pop hits “Poker Face” and “Bad Romance”.
*Visit her official website: www.michellephan.com
*Follow her on Twitter, YouTube, Facebook and Instagram.