Michelle Rodriguez is an American actress. She is best known for her roles in films The Fast and the Furious, Girlfight, Resident Evil, S.W.A.T., and Avatar. Her other notable film roles include S.W.A.T., Machete, 3 A.M., Blue Crush, and Battle: Los Angeles. She played the character Ana Lucia Cortez on ABC’s hit show Lost. She provided the voice of Rosie Velasco in the video game True Crime: Streets of LA. Born Mayte Michelle Rodriguez on July 12, 1978 in San Antonio, Texas, USA, to parents Carmen Milady Pared and Rafael Rodriguez, she grew up in Texas, Puerto Rico, the Dominican Republic and Jersey City. She belongs to Puerto Rican and Dominican descent. She has two older twin brothers named Omar and Raul, and two half-sisters on her father’s side. Her breakout role was in 2000 as Diana Guzman in the independent film Girlfight. She has dated actors Vin Diesel, Olivier Martinez and Zac Efron, model Cara Delevingne, and singer-songwriter Lenny Kravitz. 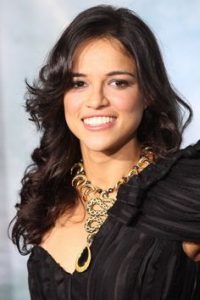 Michelle Rodriguez Education:
She dropped out of high school at 17, but later obtained a G.E.D. equivalency certificate.

Michelle Rodriguez Facts:
*She was born on July 12, 1978 in San Antonio, Texas, USA.
*His father served in the U.S. Army and was originally from Puerto Rico.
*She was ranked #77 in Stuff magazine’s “102 Sexiest Women in the World” in 2002.
*She was ranked #34 on Maxim magazine’s Hot 100 Women of 2002 list.
*She is an avid in-line skater.
*She can play the piano.
*She is bisexual.
*She is good friends with Nicole Eggert and Jason Sarayba.
*Her hobbies include tactical gun training, DJing, and skydiving.
*Follow her on Twitter, YouTube, Facebook and Instagram.