Rock legend Mick Jagger is best known as the lead vocalist and a co-founder of The Rolling Stones, and is considered one of the most influential figures in the history of rock and roll. Jagger was born Michael Phillip Jagger in Dartford, Kent on 26th July 1943. He is the son of Basil Fanshawe Jagger, a teacher, and Eva Ensley Mary Scutts, a hairdresser. He has a younger brother, Chris, who is also a musician. 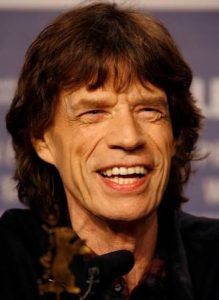 Mick Jagger Facts:
*One of the founders of the iconic band The Rolling Stones in 1962.
*In 1989, he was elected to the Rock and Roll Hall of Fame as a member of The Rolling Stones.
*Father of eight children.
*He was knighted by Prince Charles on 12 December 2003.
*He has appeared on the cover of Rolling Stone magazine over twenty times since 1968.
*Website: www.mickjagger.com
*Follow him on Twitter, Facebook, YouTube, Myspace, and Instagram.