Mika Emilie Leonia Brzezinski, better known as Mika Brzezinski, is an American news journalist and anchorwoman, who has worked for several TV networks since 1990. Brzezinski co-hosts MSNBC’s weekday morning broadcast Morning Joe with her fiancé, former Republican representative Joe Scarborough. Mika was born on May 2, 1967 in New York City, New York, the daughter of diplomat and political scientist Zbigniew Kazimierz Brzezinski and sculptor Emelie Anna Benešová. Mika is of Polish descent on her father’s side, and of Czech descent on her mother’s side. She has two brothers, Mark, a lawyer, and Ian, a foreign policy and militar affairs expert. She married Jim Hoffer in 1993, and the couple had two daughters named Emilie and Carlie before getting divorced in 2016. She became engaged to her co-host Joe Scarborough in early 2017. 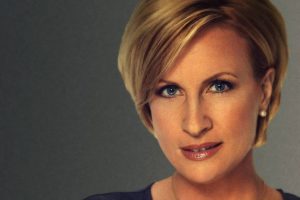 Mika Brzezinski Facts:
*She belongs to Polish and Czech descent.
*Her father, Zbigniew, was teaching at Columbia University when she was born.
*Her mother, Emilie, is an artist who carves wood sculptures from trees.
*Her brother, Mark, is an American diplomat and was the United States Ambassador to Sweden from 2011 to 2015.
*Follow Mika Brzezinski on Twitter and LinkedIn.