Singer and songwriter Stevie Nicks is best known for her work with Fleetwood Mac as well as for her chart-topping solo career. She is often regarded as the Queen of Rock n’ Roll. Nicks was born Stephanie Lynn Nicks in Phoenix, Arizona to Jess Nicks, a corporate executive, and Barbara Nicks, a homemaker. She was married in 1983 to Kim Anderson, but divorced eight months after the marriage. 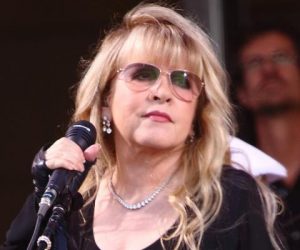 Stevie Nicks Facts:
*She was named number #98 on Rolling Stone magazine’s list of 100 Greatest Singers of All Time.
*She was ranked number 52 on VH1’s 100 Sexiest Artists.
*She was ranked number 14 on VH1’s 100 Greatest Women of Rock N Roll.
*She Had breast implants in 1976 that were eventually removed in 1994 and, according to Nicks, led to the Epstein-Barr virus.
*Follow Nicks on Twitter, Facebook and YouTube.