Mikaela Shiffrin is an American World Cup alpine ski racer and two-time Olympic gold medalist. Shiffrin won her first Olympic gold medal in 2014 in Sochi, becoming the youngest slalom champion in Olympic alpine skiing history at the age of 18, and won her second Olympic gold medal in 2018, in the giant slalom. Born Mikaela Pauline Shiffrin on March 13, 1995, in Vail, Colorado, to Eileen and Jeff Shiffrin, both of her parents were competitive skiers. She has an older brother named Taylor who skied at the University of Denver, and was part of two NCAA championship teams in 2014 and 2016. Shiffrin competed in her first International Ski Federation event at age fifteen. She won a prestigious junior event in 2010 and the first of consecutive U.S. slalom titles in 2011. She made her World Cup debut at the age of 16 at Špindlerův Mlýn in the Czech Republic, on March 11, 2011. In 2017, she began dating French alpine skier Mathieu Faivre. 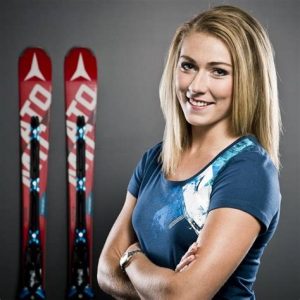 Mikaela Shiffrin Facts:
*She was born on March 13, 1995 in Vail, Colorado.
*She is two-time Olympic gold medalist.
*Her parents were both Skiers. Her father skied at Dartmouth College.
*She is one of only five Americans to ever win the World Cup overall title.
*She plays the guitar and piano.
*Her parents met in Massachusetts in 1985.
*Follow her on Twitter, Facebook and Instagram.