Cheryl Cole is an English singer, songwriter, dancer and television personality. She first gained recognition in late 2002 with the group Girls Aloud, who were nominated for five Brit Awards, winning the 2009 Best Single for “The Promise”. Cheryl became a judge on the television programme The X Factor in 2008. In addition to Girls Aloud, Cheryl began a solo career in April 2009. She released her first solo single, Fight for This Love, in October 2009 from her solo album “3 Words”, which achieved remarkable success, reaching #1 in the charts, becoming the best-selling song of 2009. Her second album ‘Messy Little Raindrops’ went straight to number one in the album charts, which yielded the 2010 #1 hit single “Promise This.” Her autobiography was published in 2012. Born Cheryl Ann Tweedy on June 30, 1983 in Newcastle upon Tyne, England, to Joan Callaghan and Gary Tweedy, she has three brothers named Joseph, Garry and Andrew and a sister named Gillian. Cheryl appeared in a television advert for British Gas when she was seven years old. She was married to England football player Ashley Cole from July 2006 to September 2010, and Jean-Bernard Fernandez-Versini form 2014 to 2016. From 2016 to 2018, she was in a relationship with One Direction singer Liam Payne, with whom she has a son named Bear Payne born in 2017. 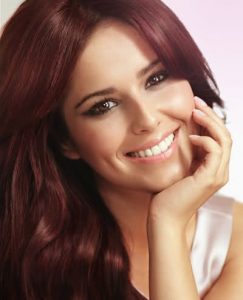 Cheryl Cole Facts:
*She was born in Newcastle upon Tyne, England on June 30, 1983.
*She was part of the top-selling English-Irish pop girl group Girls Aloud.
*She ranked #2 in 2005 and #7 in 2008 in FHM’s 100 Sexiest Women in the World editions.
*She ranked #1 in FHM’s sexiest women in the world supplement 2009.
*She is friends with Victoria Beckham, Rhianna Free Atwood, Alexandra Burke and Will Young.
*She is a big fan of The Black Eyed Peas.
*She got her first tattoo when she was sixteen; a tribal pattern on her lower back.
*She is a big fan of R&B, soul and hip-hop music.
*She has two pets named Coco and Buster.
*Visit her official website: www.cherylofficial.com
*Follow her on Twitter, Facebook, YouTube and Instagram.