Mike Tyson is an American former professional boxer who is widely regarded as one of the greatest boxers of all time. He reigned as the undisputed world heavyweight champion from 1987 to 1990. Tyson was the first heavyweight boxer to simultaneously hold the WBA, WBC and IBF titles, as well as the only heavyweight to unify them in succession. Born Michael Gerard Tyson on June 30, 1966 in Brooklyn, New York, to parents Jimmy Kirkpatrick and Lorna Tyson, he has an older brother named Rodney and an older sister named Denise, who died of a heart attack in February 1990 at age 24. Tyson made his professional debut in March 1985 in Albany, New York, against Hector Mercedes. He became the youngest heavyweight boxing champion of the world in 1986, at age 20. He has been married to Lakiha Spicer since June 6, 2009. They have two children. Tyson was previously married to Robin Givens and Monica Turner. 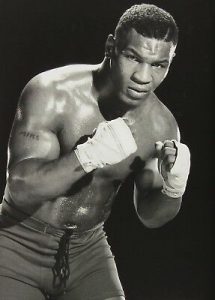 Mike Tyson Facts:
*He was born on June 30, 1966 in Brooklyn, New York City, New York, USA.
*His biological father is listed as “Purcell Tyson” on his birth certificate.
*He became a professional boxer in 1985 and won a heavyweight title from Trevor Berbick in 1986.
*Bit off a chunk of Evander Holyfield’s ear during a heavyweight title bout.
*He was convicted of rape in 1992 and served three years in jail.
*Tyson is an avid lover of birds, he keeps up to 100 pigeons at his home.
*Follow him on Twitter, YouTube, Facebook and Instagram.