Ming-Na Wen is a Chinese-American actress and voice actress. She is best known for her portrayal of Agent Melinda May in the ABC action drama series Agents of S.H.I.E.L.D., and for voicing Fa Mulan in the Disney film 1998 Mulan and Mulan II. Wen’s other notable works include Ralph Breaks the Internet, Milo Murphy’s Law, Sofia the First, Stargate Universe, As the World Turns, Prom Night, Vanished, The Single Guy, ER, Street Fighter, The Joy Luck Club, One Night Stand, Mulan, April Rain, and The Darkness. Born on November 20, 1963 in Coloane, Coloane Village, Macao, her parents divorced when she was very small. Her mother remarried and they moved to New York City when Wen was four years old. She attended Mount Lebanon High School and graduated from Carnegie Mellon University in 1986. [© celebsfacts.com] She has been married to Eric Michael Zee since June 16, 1995. They have two children. She was previously married to Kirk Aanes. 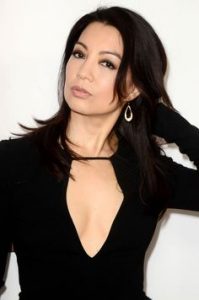 Ming-Na Wen Facts:
*She was born on November 20, 1963 in Coloane, Coloane Village, Macao.
*She is of Chinese descent.
*People Magazine named her one of the top 100 Most Beautiful People in the World in 2008.
*She speaks Cantonese and Mandarin fluently.
*Visit her official website: www.ming-na.com
*Follow her on Twitter, Facebook and Instagram.