Minnie Driver is a British actress and singer-songwriter. She is best known for playing the role of Skylar Satenstein in the 1997 film Good Will Hunting, for which she received an Academy Award nomination for Best Supporting Actress. She played Fiona Bowa on the NBC sitcom About a Boy. Her role as Dahlia Malloy in the TV series The Riches earned her an Emmy Award and Golden Globe nominations. Her other well-known films include Big Night, The Phantom of the Opera, Sleepers, Tarzan, Conviction, Beyond the Lights, Barney’s Version, Return to Me, Ella Enchanted, Grosse Pointe Blank and The Governess. She began starring on the ABC sitcom Speechless in 2016. As a singer-songwriter, she released her debut album Everything I’ve Got in My Pocket in 2004 via Zoë Records. It reached #43 on US Top Heatseekers list. Born Amelia Fiona J. Driver on January 31, 1970 in Finsbury Park, London, England, to Gaynor Churchward and Ronnie Driver, she belongs to English and Scottish descent. She has an older sister, Kate, and two younger half-brothers: Charlie Driver and Ed Churchward. After graduating from drama school in 1991, she appeared on various British television shows. She made her film debut in Circle of Friends. She gave birth to a son, Henry in September 2008, from a brief relationship with television writer and producer Timothy J. Lea. She was previously in a relationship with Good Will Hunting co-star Matt Damon. 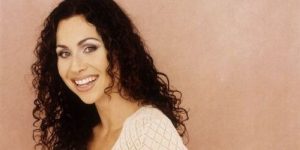 Minnie Driver Facts:
*She was born in Finsbury Park, London on January 31, 1970, and was raised in Barbados.
*She is of English and Scottish descent on her father’s side.
*Her parents divorced when she was seven years old.
*She is a vegetarian.
*She used to work as a singer and jazz guitarist in London before she started her acting career.
*She got a tattoo of a red rose on her right butt cheek at age 15.
*She was once engaged to Josh Brolin.
*Visit her official website: www.minniedriver.com
*Follow her on Twitter, Myspace and Instagram.