Mira Sorvino is an American actress. She is best known for her starring role as Linda Ash in the 1995 movie Mighty Aphrodite, for which she won an Academy Award for Best Supporting Actress. Sorvino has also appeared in such films as Human Trafficking, Lulu on the Bridge, Summer of Sam, Norma Jean & Marilyn, Romy and Michele’s High School Reunion, Like Dandelion Dust, and The Replacement Killers. Her television credits include Swans Crossing, The Buccaneers, Psych, Falling Skies, Intruders, and Lady Dynamite. Born Mira Katherine Sorvino on September 28, 1967 in New York City, to parents Paul Sorvino, a character actor and film director, and Lorraine Ruth Davis, a drama therapist for Alzheimer’s disease patients and a former actress, Sorvino was raised in Tenafly, New Jersey. She has a younger sister named Amanda Sorvino and a younger brother named Michael Sorvino. She attended Dwight Englewood High School in Englewood, New Jersey, and graduated magna cum laude from Harvard University in 1989, with a Bachelor’s degree in Chinese. She married Christopher Backus on June 11, 2004. They have four children: two daughters Mattea Angel (born 2004) and Lucia (born 2012), and two sons Johnny Christopher King (born 2006) and Holden Paul Terry Backus (born 2009). 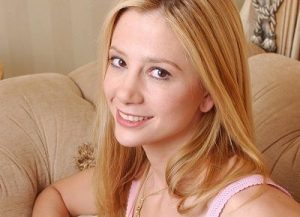 Mira Sorvino Facts:
*She was born on September 28, 1967 in New York City.
*She is of Italian descent on her father’s side.
*She is fluent in Mandarin Chinese and French.
*People (USA) magazine named her one of the top 50 Most Beautiful People in the World in 1996.
*She is a big fan of the original Star Trek (1966) series.
*She was in a relationship with Olivier Martinez from 1998 to 2003.
*She has been a U.N. Goodwill Ambassador to Combat Human Trafficking, since 2009 through 2012.
*Follow her on Twitter and Instagram.