Mirai Nagasu is an American figure skater of Japanese descent. She is a three-time Four Continents medalist, the 2007 JGP Final champion, a two-time World Junior medalist, and a seven-time U.S. national medalist. In 2008, Nagasu became the youngest woman since Tara Lipinski in 1997 to win the U.S. senior ladies’ title, and the second-youngest in history at the time. She is also the first lady since Joan Tozzer in 1937 and 1938 to win the junior and senior national titles in consecutive years. She became the first female figure-skater to land a triple axel at the Olympics during her team portion at the 2018 winter games. 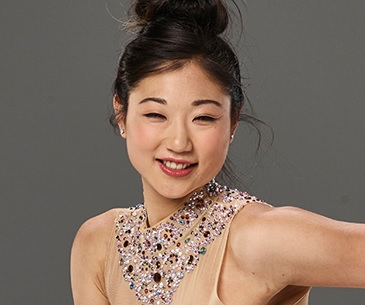 Mirai Nagasu Facts:
*Born on April 16, 1993 in Montebello, California, she was raised in Arcadia, California.
*He parents are immigrants from Japan. They own a Japanese restaurant in Arcadia.
*Her first name Mirai means “future” in Japanese.
*She began skating in 1998 at the age of 5.
*She made her international debut in the 2008-09 season.
*She represented the United States at the 2010 Winter Olympics at the age of 16 and placed 4th in the ladies’ event.
*She is the first American female figure skater in history to perform a triple axel at an Olympics. (2018 winter games)
*She admires Michelle Kwan, Yuna Kim and Mao Asada.
*She enjoys reading and hanging out with friends.
*She has a Chihuahua dog.
*Follow her on Twitter and Instagram.