Miranda Cosgrove is an American actress and singer. She is best known for her roles as Megan Parker in the Nickelodeon television series Drake & Josh, and as Carly Shay in the Nickelodeon teen sitcom iCarly. She starred as Shea Moore in the 2016 NBC sitcom Crowded. She released her debut studio album, Sparks Fly, in 2010. She has also done voice work in Khan Kluay, Despicable Me, Despicable Me: Home Makeover, Despicable Me 2, Despicable Me: Training Wheels, A Mouse Tale, and Despicable Me 3. Born Miranda Taylor Cosgrove on May 14, 1993 in Los Angeles, California, USA, she is an only child born to Chris and Tom Cosgrove. Cosgrove was homeschooled from sixth grade onwards, and was accepted at New York University and the University of Southern California (USC) in 2011. She was discovered at the age of three, by a talent agent while singing and dancing at the Los Angeles restaurant Taste of L.A. She began her career at the age of seven with several television commercial appearances. She made her film debut in 2003 as Summer Hathaway in School of Rock. 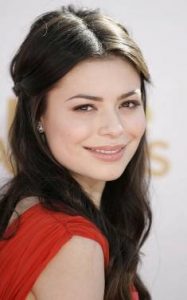 Albums: Music From and Inspired by the Hit TV Show iCarly, Sparks Fly, Cloudy With a Chance of Meatballs

Miranda Cosgrove Facts:
*She was born on May 14, 1993 in Los Angeles, California, USA.
*She is of English, Irish, and French descent.
*She released her debut extended play, About You Now in 2009.
*In 2011, she was named the highest-paid child actress by Guinness World Records.
*She is a big fan of Orlando Bloom and Rachel McAdams.
*Her favorite artists are Gwen Stefani, Paramore and Avril Lavigne.
*Her favorite school subject was English.
*She’s allergic to cats.
*She has a pet dog named Penny, and a cat named Midnight.
*Follow her on Twitter, Facebook and Instagram.