Miranda Lambert is an American country music artist and songwriter who rose to fame as a finalist on the 2003 season of Nashville Star, where she finished in third place. Lambert is best known for her hit singles “Gunpowder and Lead,” “Kerosene,” “The House That Built Me,” “Mama’s Broken Heart,” “Over You,” “White Liar,” “Heart Like Mine,” and “Baggage Claim,” and her albums ‘Kerosene,’ ‘Revolution,’ ‘Crazy Ex-Girlfriend’ and ‘Platinum.’ She is the recipient of various accolades including; two Grammy Awards, twenty seven Academy of Country Music Awards, five American Country Awards, seven CMT Music Awards, thirteen Country Music Association Awards and other awards and nominations. Born Miranda Leigh Lambert on November 10, 1983 in Lindale, Texas, both her parents, Bev Lambert and Rick Lambert, are private investigators. She has one younger brother named Luke. Lambert was inspired to pursue a career in country music after seeing Garth Brooks live. In 2019, she married Brendan McLoughlin. She was previously married to country singer Blake Shelton from 2011 to 2015. 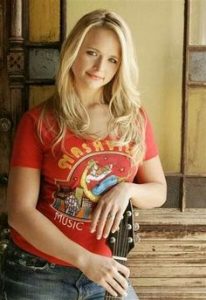 Miranda Lambert Facts:
*She was born on November 10, 1983 in Lindale, Texas, USA.
*She is of Irish and Native American descent.
*She was named after her great-grandmother, Lucy Miranda.
*She released a self-titled and self-financed independent album in 2001.
*She signed with Epic Nashville in 2004.
*Her debut major-label album, Kerosene (2005), debuted at number 1 on the Billboard Top Country Albums chart and 18 on the Billboard 200 list.
*She has won two Grammy Awards out of eighteen nominations.
*She has nine tattoos of various objects and symbols, and the word “tumbleweed”.
*Visit her official website: www.mirandalambert.com
*Follow her on Twitter, YouTube, Facebook and Instagram.