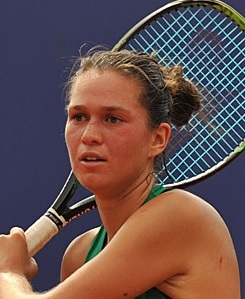 Miriam Kolodziejová is a Czech tennis player who achieved a career-high singles ranking of World No. 256 on July 2, 2018, and a doubles ranking of world No. 201 on February 7, 2022. Kolodziejová has won seven singles and nine doubles titles on the ITF Circuit. She won the girls’ doubles event at the Australian Open with fellow Czech Markéta Vondroušová, defeating Katharina Hobgarski and Greet Minnen in the final. She then went on to win the girls’ doubles event at the French Open with Vondroušová, defeating Caroline Dolehide and Katerina Stewart in the final.

Miriam Kolodziejová Facts:
*She was born on April 11, 1997 in Most, Czechia.
*She started playing tennis at the age of six.
*She turned professional in May 2015.
*She plays right-handed and has a two-handed backhand.
*She has a career-high doubles ranking of No. 201.