Miriam McDonald is a Canadian actress. She is best known for her role as Emma Nelson on the long-running teen television series Degrassi: The Next Generation which she starred in from 2001 until 2010. In 2008, McDonald portrayed the role of Danielle “Daisy” Brooks in the made-for-television erotic-thriller movie, Poison Ivy: The Secret Society and got two roles in the popular Canadian TV show Lost Girl in 2013. In addition, she has done voice work for 13 episodes, each, of the series, The Ripping Friends, Cyberchase and Pecola. She also provided her voice in the animated series, ‘Englebert’. 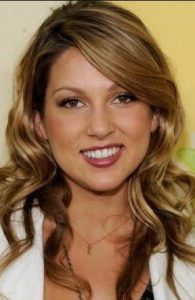 Miriam McDonald Facts:
*She was born on July 26, 1987 in Oakville, Ontario, Canada.
*Her full name is Miriam Katherine McDonald and has one sister.
*She was featured on the cover of Reader’s Digest in August 2007.
*She enjoys dancing, including ballet, jazz, tap and hip hop.
*She enjoys boxing.
*She likes to swim and play tennis.
*She was close friends with “Degrassi” co-star, Ryan Cooley.
*She is very good friends with Megan Park and friends with Cassie Steele, Nina Dobrev and Shenae Grimes-Beech.
*She is also an accomplished dancer and a professional yoga instructor.
*She once dated Degrassi co-star Ryan Cooley.
*She has a dog named Sully.
*Follow her on Twitter, Facebook and Instagram.