American rapper, singer-songwriter and record producer who is the only female rapper to have six albums certified platinum by the RIAA, including one double platinum (Under Construction). Elliott’s solo debut studio album Supa Dupa Fly, which spawned the top 20 single “Sock It 2 Me”, debuted at #3 on the Billboard 200, the highest charting debut for a female rapper at the time. Her second album, Da Real World (1999), produced the singles “She’s a Bitch”, “All n My Grill”, and top five hit “Hot Boyz”. 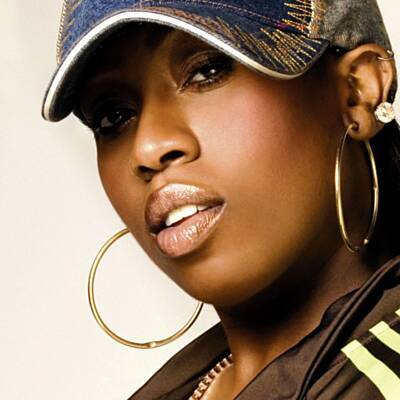 Missy Elliott Facts:
*She was born on July 1, 1971 in Portsmouth, Virginia, USA.
*She started off her career as the lead singer of Sista, who pinned its only hit, “Brand Nu”.
*In 2019, Elliott released her first extended play, titled Iconology, became the first female rapper inducted into the Songwriters Hall of Fame and received the MTV VMAs Michael Jackson Video Vanguard Award for her impact on the music video landscape.
*Her debut studio album, Supa Dupa Fly, was ranked 93 on Rolling Stone’s 500 Greatest Albums of All Time in 2020.
*Billboard ranked her at number five on the 100 Greatest Music Video Artists of All Time in 2020.
*She owns a mansion in Virgina Beach, Virginia.
*She is a huge fan of Björk.
*She is good friends with Ciara, Janet Jackson, Lil’ Kim, Eve, Trina, Da Brat, and Monica.
*She was close friends with Aaliyah up until her death in 2001.
*She was molested by her cousin when she was 8 years old.
*She has Graves’ disease.
*She has a pet dog named Fendi Dior.
*Visit her official website: www.missy-elliott.com
*Follow her on Twitter, YouTube, Facebook and Instagram.