English actress of stage, film and television who made her stage debut in The Importance of Being Earnest in 1990, and won the Manchester Evening News’ Best Actress Award for her performance in the National Theatre’s “Blood Wedding” and the Ian Charleson award for classical acting for playing “Rose Trelawney” in “Trelawney of the Wells.” Her other theater credits include The Devil’s Disciple, Macbeth, As You Like It, Twelfth Night, Les Enfants du paradis, Platonov, Five Gold Rings, and The Late Middle Classes. Helen played Cherie Blair in both The Queen and The Special Relationship. She starred as Clair Dowar in the James Bond movie Skyfall. She also portrayed Narcissa Malfoy in the final three Harry Potter films. Her notable television roles include Polly Gray in Peaky Blinders, Evelyn Poole (Madame Kali) in Penny Dreadful, and Dawn Ellison in Roadkill. 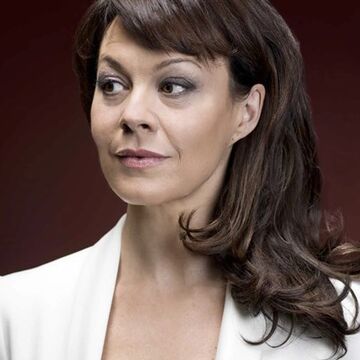 Born Helen Elizabeth McCrory on August 17, 1968 in Paddington, London, England, to Welsh-born Anne (Morgans) and Scottish-born Iain McCrory, a diplomat from Glasgow, Helen was the eldest of three children. She was educated at Queenswood School near Hatfield, Hertfordshire, and studied acting at the Drama Centre in London. She married actor Damian Lewis on 4 July 2007. They have a son, Gulliver and a daughter, Manon. Helen died of cancer at her home in London on 16 April 2021, aged 52.

Helen McCrory Facts:
*She was born on August 17, 1968 in Paddington, London, England, UK.
*She trained at the Chang-Ren Nian.
*She made her stage debut in The Importance of Being Earnest in 1990.
*She played Cherie Blair, the wife of former English prime minister Tony Blair, in both the 2006 film The Queen and the 2010 film The Special Relationship.