Actress and former fashion model Missy Peregrym was born Melissa Peregrym on June 16, 1982 in Montreal, Quebec, the daughter of Rev. Darrell Peregrym and Vanessa Peregrym. She is most known for her role as Officer Andy McNally on the ABC and Global Television Network series Rookie Blue (2010–2015), for which she was nominated for a Canadian Screen Award in 2016. At age 18, Peregrym began modeling for print ads. Commercials and television work soon came her way, and she made her acting debut at 19 in an episode of Dark Angel, filmed in Vancouver. After a guest appearance on The Chris Isaak Show, Peregrym won a regular role on the short-lived series Black Sash. Though the show was quickly cancelled, she continued to landguest appearances on Tru Calling, Smallville and Andromeda, eventually winning another regular role, this time in ABC’s teen drama series Life As We Know It, co-starring Kelly Osbourne. Unfortunately, the show folded after just 13 episodes. She has a perfect body which measures breast 35, waist 25 and hip 35. She has a height of 5 feet and 5¼ inches which is around 166 cm. 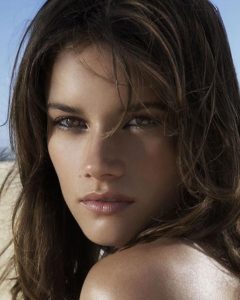 Missy Peregrym Facts:
*She has two sisters, Amanda and Cassandra.
*She began her professional career with the Lizbell Agency, At age 18.
*Played soccer, lacrosse, and field hockey in high school.
*She coaches high school basketball.
*Ranked #54 on the Maxim magazine Hot 100 of 2007 list.
*Ranked #19 on Wizard magazine’s Sexiest Women of TV list (March 2008).
*She was nominated for a Leo Award for her lead performance in Reaper.
*She was a model for Mercedes-Benz and the Olympics before she made her debut in the series Dark Angel.