Molly Ringwald is an American actress. She is best known for her performances in John Hughes teen films Sixteen Candles, The Breakfast Club, and Pretty in Pink. She has also starred in the films The Pick-up Artist, Something to Live for: The Alison Gertz Story, The Stand, Fresh Horses, For Keeps, and Some Folks Call It a Sling Blade. Her notable television appearances include: The Facts of Life, The Stand, Townies, The Secret Life of the American Teenager, Raising Expectations, and Riverdale. She is also known for being a member of the acting Brat Pack of the 1980s and was ranked number 1 on VH1’s 100 Greatest Teen Stars. Born Molly Kathleen Ringwald on February 18, 1968 in Roseville, California, to parents Adele Edith and Robert Ringwald, she is of German, English, and Swedish descent. She has two siblings, Kelly and Beth, and an older brother who died before she was born. Molly’s first acting break was as Kate in the West Coast production of “Annie”. She married Panio Gianopoulos in 2007. They have one daughter, Mathilda Ereni, and twins, Roman Stylianos and Adele Georgiana. She was previously married to Valery Lameignère. 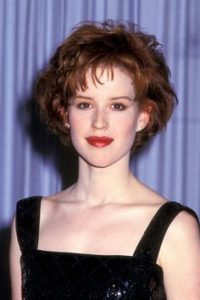 Molly Ringwald Facts:
*She was born on February 18, 1968 in Roseville, California, USA.
*She began her acting career at the age of five in a stage production of Alice In Wonderland.
*She graduated from the Lycée Français de Los Angeles.
*She was one of the eight original core members of the 1980s ‘Brat Pack’ along with Judd Nelson, Demi Moore, Rob Lowe, Anthony Michael Hall, Ally Sheedy, Emilio Estevez and Andrew McCarthy.
*She is fluent in French.
*She’s childhood friend of Adam Carolla.
*Visit her official website: www.iammollyringwald.com
*Follow her on Twitter, Facebook and Instagram.