Danielle Vega is an American actress. She is best known for her portrayal of Kim on the PBS television series Barney & Friends, and for her role as Ceci Camayo on Hulu’s drama series East Los High. She has also appeared in the films So This Is Christmas, Betrayed at 17, and Teeth and Blood. Born Erica Danielle Rhodes on February 4, 1986 in Atlanta, Georgia, she was raised in Dallas, Texas. She is of British and Irish descent on her father’s side, and of Spanish, African-American, and American Indian (Cherokee) descent on her mother’s side. She earned her BA in journalism from Southern Methodist University. 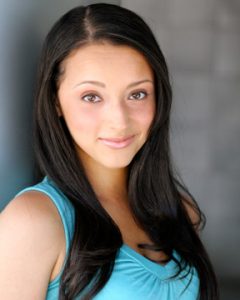 Danielle Vega Facts:
*She was born on February 4, 1986 in Atlanta, Georgia, USA.
*Her ancestry includes Spanish, African-American, British, Cherokee, and Irish.
*She is second cousin to singer Ralph Tresvant of New Edition.
*She is a member of Alpha Kappa Alpha sorority.
*She appeared in the children television show Barney & Friends at age 9.
*She was nominated for Best Lead Actress at the 2014 Red Dirt International Film Festival for her performance in the short film Hana.
*She was nominated for a Daytime Emmy award for Outstanding Performer in a New Approaches Drama Series in 2015 for her work as Ceci Camayo in Hulu’s East Los High.
*She auditioned for the ninth season of American Idol in 2009.
*Follow her on Twitter, LinkedIn, Facebook and Instagram.