Momoe Yamaguchi is a Japanese former singer and actress, who retired at the age of 21 in 1980 to marry her frequent costar, Tomokazu Miura. One of the most popular idol singers of the 1970s, Yamaguchi has released 32 singles, including three #1 hits, and 21 albums. As an actress, she starred in 15 feature films and several television serial dramas. She released an autobiography titled Aoi Toki in 1981. Born on January 17, 1959 in Tokyo, Japan, Momoe and her younger sister, Toshie was raised by their single mother. In 1966 she, her mother and sister moved to Yokosuka-shi where she attended primary and secondary school. At age 13, Momoe entered a TV talent search program “Star Tanjo” where she finished second, and signed with Hori Productions. She has been married to Tomokazu Miura since November 19, 1980. They have two sons: Yutaro and Takahiro. 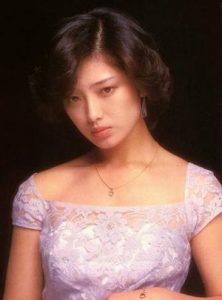 Momoe Yamaguchi Facts:
*She was born on January 17, 1959 in Tokyo, Japan.
*Her career lasted from 1972 to 1980.
*Her husband, Tomokazu Miura, has been an actor since he was 18, and a surprisingly successful one considering his narrow range and lack of on-screen charisma.
*She has a niece in the United States who she has never met.