Monica Bellucci is an Italian actress and model who has starrted in such films as Malèna, The Matrix Reloaded, Brotherhood of the Wolf, The Matrix Revolutions, Irréversible and The Passion of the Christ. Bellucci voiced the character Kaileena in the video game Prince of Persia: Warrior Within, and the French voice of Cappy for the French version of the 2005 animated film Robots. 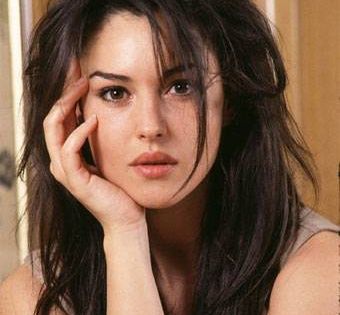 Born Monica Anna Maria Bellucci on September 30, 1964 in Città di Castello, Umbria, Italy, she is the only child of Brunella and Pasquale Bellucci. Bellucci started her career as a fashion model, modelling for Dolce & Gabbana and Dior. She married Vincent Cassel and the couple had two daughters, Deva in 2004 and Leonie in 2010. They announced their divorce on August 26, 2013. She was previously married to Italian photographer Claudio Carlos Basso.

Monica Bellucci Facts:
*Born on September 30, 1964 in Città di Castello, Umbria, Italy, she grew up in Lama of San Giustino.
*She started modelling at 13 by posing for a local photo enthusiast.
*She made a n*de calendar for the Italian magazine Max in 1998 and another one for the Italian magazine GQ in 2000.
*She ranked #6 in 1999 and #9 in 2002 in “Maxim” magazine’s Hot 100 Women in the World editions.
*Empire magazine named her as one of the 100 Sexiest Stars in film history (#35) (2007).
*She is fluent in Italian, French, Spanish, Persian, and English and a bit of Portuguese.
*She has a wax statue in the Grevin Museum in Paris.
*Follow her on Twitter, YouTube, Facebook and Instagram.