Monica Raymund is an American actress. She is best known for starring as Maria “Ria” Torres in the Fox crime drama Lie to Me, Dana Lodge in the CBS legal drama The Good Wife, Gabriela Dawson in the NBC drama Chicago Fire and Jackie Quińones in the Starz crime drama Hightown. Born Monica Maria Raymund on July 26, 1986 in St. Petersburg, Florida, to parents Sonia and Steve Raymund, her father is of English and Ashkenazi Jewish descent and her mother is Dominican. Raymund graduated from Shorecrest Preparatory School in St. Petersburg, Florida, in 2004, and studied acting at Julliard, graduating in 2008. She was married to a writer Neil Patrick Stewart from 2011 to 2014. In 2015, she began dating Tari Segal. 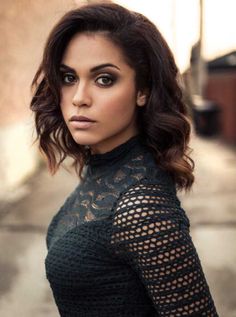 Monica Raymund Facts:
*She was born on July 26, 1986 in St. Petersburg, Florida, USA.
*Her full name is Monica Maria Raymund.
*She started learning to play the piano at the age of 5.
*She started her acting career in 2004.
*She’s a graduate of prestigious Juilliard School.
*She is the founder/president of the theatrical production company SISU Theatrical Productions.
*She is an ardent supporter of LGBT rights.
*She came out publicly as bisexual for the first time via Twitter in February 2014.
*She has two tattoos: a feather on the sternum and a moth on the arm.
*Follow her on Instagram.