Morena Baccarin is a Brazilian-American actress. She is best known for playing the role of Inara Serra in the sci-fi television series Firefly and the movie Serenity. She is also known for roles such as Jessica Brody in Homeland, Anna in V, and Dr. Leslie Thompkins in Gotham. She played Vanessa Carlysle in the 2016 hit movie Deadpool. She reprised her role in the 2018 sequel Deadpool 2. Baccarin has also done voice work in Batman: The Brave and the Bold, and The Flash. Born Morena Silva de Vaz Setta Baccarin on June 2, 1979, in Rio de Janeiro, Rio de Janeiro, Brazil, to parents, actress Vera Setta and journalist Fernando Baccarin, her family moved to Greenwich Village, New York, in the United States when she was just seven years old. She grew up in the West Village and went to the New York City Lab School for junior high. She attended the Fiorello H. LaGuardia High School of Music & Art and Performing Arts before she studied theater at Juilliard. She has been married to Gotham co-star Ben McKenzie since June 2, 2017. She was previously married to director Austin Chick from 2011 to 2016. She has two children: son Julius with first husband Austin Chick and daughter Frances Laiz with Ben McKenzie. 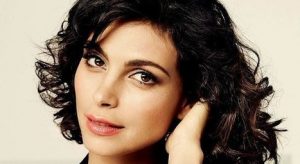 Morena Baccarin Facts:
*She was born on June 2, 1979, in Rio de Janeiro, Brazil.
*Her mother is Brazilian television, film and theater actress Vera Setta.
*Her first name ‘Morena’ means “brunette” in Portuguese.
*She speaks Brazilian Portuguese fluently.
*She was ranked at #57 in 2014 on the list of Maxim’s “Hot 100.”
*Follow her on Twitter, Facebook and Instagram.