Morgan Freeman is an American actor and narrator who earned an Academy Award for Best Supporting Actor for his performance in the Clint Eastwood film Million Dollar Baby in 2005. He is also known for roles in the films The Dark Knight Trilogy, Driving Miss Daisy, The Shawshank Redemption, Glory, Bruce Almighty, Unforgiven, The Sum of All Fears and Dolphin Tale. Born on June 1, 1937 in Memphis, Tennessee, to Mayme Edna, a teacher, and Morgan Porterfield Freeman, a barber, Morgan has three older siblings. He played the lead role in a school play when he was nine years old. He was married to Jeanette Adair Bradshaw from 1967 to 1979, and Myrna Colley-Lee from 1984 to 2010. He has two daughters, Deena and Morgana and two sons, Saifoulaye and Alfonso. 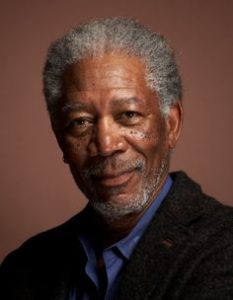 Morgan Freeman Facts:
*He won a statewide drama competition when he was 12 years old.
*He has his own production company, Revelation Entertainment.
*He used to work in the United States Air Force as a mechanic.
*He has spoken in opposition to Black History Month, saying that black history is American history.
*He was listed at 31 in Empire (UK) magazine’s “The Top 100 Movie Stars of All Time” list in October 1997.
*He is the only African-American actor to appear in three Best Picture Oscar Winners: Million Dollar Baby, Unforgiven and Driving Miss Daisy.
*Follow him on Facebook and Google+.