Mukti Mohan is an Indian dancer and actress who competed in Star One’s dance reality show Zara Nachke Dikha. She was part of the winning team “Masakkali Girls”. She also participated on the sixth season of Jhalak Dikhhla Jaa and Fear Factor: Khatron Ke Khiladi. She has also appeared in the films Blood Brothers, Kaanchi: The Unbreakable, Saheb, Biwi Aur Gangster, Hate Story and Daruvu. Born on June 21, 1987 in Mumbai, India, her father, Brij Mohan Sharma, is a government officer and her mother, Kusum, is a homemaker. She is the younger sister of the singer Neeti Mohan and dancer Shakti Mohan. 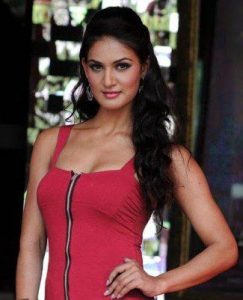 Mukti Mohan Facts:
*She was born on June 21, 1987 in Mumbai, India.
*She has three sisters: Shakti (dancer), Neeti (singer), and Kriti (talent manager).
*She made her debut in 2007 in the film Blood Brothers.
*In 2010, she appeared in the comedy show Comedy Circus Ka Jadoo on Sony Entertainment Television, with Kapil Sharma as her comedy partner, replacing Kavita.
*Visit her official website: www.muktimohan.com
*Follow her on Twitter, Facebook and Instagram.