Murtaz Shelia is a Georgian former footballer who played for Dinamo Tbilisi, 1. FC Saarbrücken, Spartak-Alania Vladikavkaz, Manchester City and Lokomotivi Tbilisi. He was capped 29 times for Georgia between 1994 and 1998. Born Murtazi Georgievich Shelia on March 25, 1969 in Tbilisi, Georgia, he is married to model Lika Kvaratskhelia. 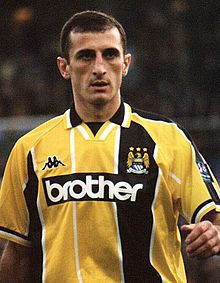 Murtaz Shelia Facts:
*He was born on March 25, 1969 in Tbilisi, Georgia.
*He played as a defender.
*His clubs included Dinamo Tbilisi, Spartak-Alania Vladikavkaz, 1. FC Saarbrücken, Manchester City and Lokomotivi Tbilisi.
*In 1995, he joined English club Manchester City, where his former Dinamo Tbilisi team-mate Georgi Kinkladze was the star player.
*He retired in 2001.
*His daughter, Ana, is a model.