Myleene Klass is a British singer, model and media personality. She was a member of the pop band Hear’Say who released two studio albums and four singles. She released her debut solo album Moving On in 2003. Besides her career in music, Klass also pursued her career as a television and radio presenter. She has hosted television shows including Popstar to Operastar and BBQ Champ on ITV and The One Show on BBC One. She has released a book My Bump and Me: From Morning Sickness to Motherhood, in which she shared her pregnancy experience. Born Myleene Angela Klaas on April 6, 1978 in Gorleston, United Kingdom to a Filipino mother and Anglo-Austrian father, she has one brother named Don, and a sister named Jessie. She attended the Guildhall School of Music and Drama and then The Royal Academy of Music, where she obtained a postgraduate scholarship. She was married to Graham Quinn from 2011 to 2013. 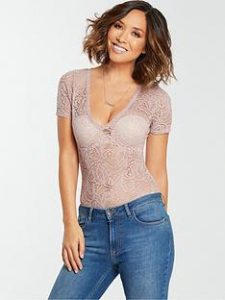 Myleene Klass Facts:
*She was born on April 6, 1978 in Gorleston, Norfolk, England.
*She belongs to the musician family. Six generations on her father’s side were all musicians.
*Former member of British pop group Hear’Say.
*She plays the piano, harp and violin.
*She joined the 2006 series of I’m a Celebrity … Get Me Out of Here!, where she came in second place, behind Matt Willis.
*In April 2012, her net worth was about £11 million.
*Visit her official website: www.myleeneklass.co.uk
*Follow her on Twitter, Facebook and Instagram.