Julia Stegner is a German fashion model. She is most famous for her work for lingerie retailer Victoria’s Secret and as a spokesmodel for a number high profile brands. She appeared in the 2005, 2006, 2007, 2008, 2009, 2010, and 2011 Victoria’s Secret Fashion Shows. She has appeared on the cover of fashion magazines such as Vogue, Elle, Harper’s Bazaar, Amica, Allure, Numeo, and Grazia. She has also advertised for many brands such as Celine, Yves Saint Laurent, Ralph Lauren, Dolce & Gabbana, and Dior. Born on November 2, 1984 in Munich, Bavaria, West Germany, to Erika and Günter Stegner, she has one older sister named Jeanette. She was discovered during the Munich Oktoberfest Beer Festival by model agency owner, Louisa von Minckwitz at age fourteen. She made her first major cover appearance, for Elle magazine. She has been married to Benny Horne since April 2014. They have a daughter together. 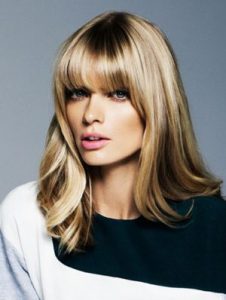 Julia Stegner Facts:
*She was born on November 2, 1984 in Munich, Bavaria, West Germany.
*She started modeling as a child.
*She played basketball in high school.
*She was discovered in 2000 in Munich.
*She appeared in the 2010 ‘Maybelline Calendar’.
*She is an animal lover.
*She usually rides a bicycle.
*In 2009, she began dating photographer, Steven Pan.
*Visit her official website: www.juliastegner.com
*Follow her on Twitter and Instagram.