Nabha Natesh is an Indian actress, known for appearing in Telugu and Kannada films. Her notable film roles include Patakha Parvathi in Vajrakaya, Chandni in iSmart Shankar, Siri/Meghana in Nannu Dochukunduvate, Nabha in Disco Raja, and Koumudi in Alludu Adhurs. 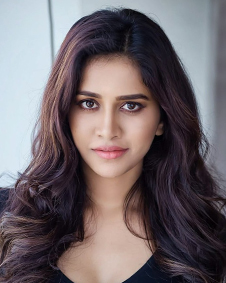 Born on December 11, 1995 in Sringeri, India. Natesh did her schooling from her home town Sringeri and studied Engineering at Information Science from N.M.A.M. Institute of Technology, Udupi, Karnataka. She started modelling along with acting in plays under National Award winning director Prakash Belawadi. Natesh made her film debut in Vajrakaya (2015).

Nabha Natesh Facts:
*She was born on December 11, 1995 in Sringeri, India.
*She was trained in acting under Prakash Belawadi.
*She started working as a model at the age of 16.
*She won the title of Sinhgad Femina Miss Intellectual.
*She made her acting debut in the 2015 film Vajrakaya, opposite Kannada actor Shiva Rajkumar.
*She made her Telugu film debut as Siri/Meghana in Nannu Dochukunduvate in 2018.
*Follow her on Twitter, Facebook and Instagram.