American singer-songwriter who became known for his idiosyncratic musical style, introspective and elliptical songwriting, and wide vocal range, Ocean is among the most acclaimed artists of his generation. He is widely considered a representative artist of alternative R&B. Ocean’s first mixtape, Nostalgia, Ultra, was released in 2011. Critics liked the album. His debut studio album Channel Orange (2012) was one of the most acclaimed albums of 2012. It was nominated for Album of the Year and won Best Urban Contemporary Album at the 2013 Grammy Awards, while the album’s hit single “Thinkin Bout You” garnered Ocean a nomination for Record of the Year. Ocean won the 2013 Brit Award for International Male Solo Artist. 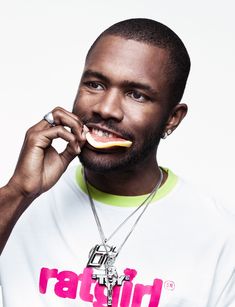 Born Christopher Edwin Breaux on October 28, 1987 in Long Beach, California, to parents Katonya Breaux and Calvin Edward Cooksey, Ocean and his family relocated to New Orleans when he was five years old. He washed cars and walked dogs as a teenager to afford studio sessions, and worked as a ghostwriter for Brandy, Justin Bieber, and John Legend, among others. In 2012, Ocean came out as openly bisexual.

Frank Ocean Facts:
*Born on October 28, 1987 in Long Beach, California, he moved to New Orleans, Louisiana when he was five.
*He began his musical career as a ghostwriter, prior to joining the hip hop collective Odd Future in 2010.
*His debut album, Channel Orange, reached #1 on the US Hip-Hop charts.
*He was named as GQ Magazine’s Rookie of The Year for 2011.
*He finished second place in BBC’s Sound of 2012 poll.
*He was ranked at #8 on GQ’s The 50 Most Stylish Men In Los Angeles Right Now (2012).
*He was listed on Forbes Top 30 Under 30 list in music. (2012).
*One of Time Magazine’s 100 Most Influential People in the World. (2013).
*He is close friends with Tyler the Creator.
*He is friends with Kendall Jenner.
*He is considered to be a global gay icon.
*He was one of the first major hip-hop/R&B artists to say that he had a same-sex relationship.
*He describes himself as a perfectionist.
*Visit his official website: www.blonded.co
*Follow him on Tumblr, YouTube, Facebook and Instagram.