Nadine Coyle is an Irish singer, model and actress who rose to prominence in late 2002 upon winning a place in Girls Aloud, a girl group created through ITV’s Popstars: The Rivals. The group achieved large success, having twenty consecutive top ten singles (including four number ones) in the UK, six studio albums have all been certified platinum by the British Phonographic Industry (BPI), two of which went to number one in the UK, and accumulating a total of five BRIT Award nominations. In 2009, Girls Aloud won “Best Single” with their song “The Promise”. Coyle released her debut solo album, Insatiable on November 8, 2010 through her own label, Black Pen Records, in partnership with supermarket giant Tesco. In 2019, Coyle competed in the nineteenth series of I’m a Celebrity, Get Me Out of Here!, finishing fifth out of twelve celebrities. Born Nadine Elizabeth Louise Coyle on June 15, 1985 in Derry, Northern Ireland, to parents Lillian and Niall Coyle, she has two sisters named Rachel and Charmaine. She was in relationship with Jason Bell from 2008 to May 2011 and then they got back together in 2013. Together they have one daughter, Anaíya Bell. 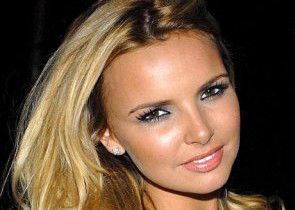 Nadine Coyle Facts:
*She was born on June 15, 1985 in Derry, Northern Ireland, UK.
*In 2001, she joined the group Six, but was forced to leave the group because she was underaged.
*She released five consecutive platinum-selling pop albums as a member of the all girl pop group Girls Aloud.
*She was ranked #35 in FHM 100 Sexiest Women 2005.
*She is a supporter of Glasgow Celtic Football Club.
*She has a daughter named Anaíya with her fiancé, Jason Bell.
*Visit her official website: www.officialnadinecoyle.com
*Follow her on Twitter, YouTube, Facebook and Instagram.