Nick Bosa is an American football defensive end for the San Francisco 49ers of the National Football League. Bosa played college football at Ohio State. He was drafted by the 49ers second overall in the 2019 NFL Draft and was named NFL Defensive Rookie of the Year in 2019. Born Nicholas John Bosa on October 23, 1997 in Fort Lauderdale, Florida, his father John and brother Joey both played in the National Football League. He was a five-star recruit and was ranked among the best players in his class while playing high school football at St. Thomas Aquinas in Fort Lauderdale, Florida. 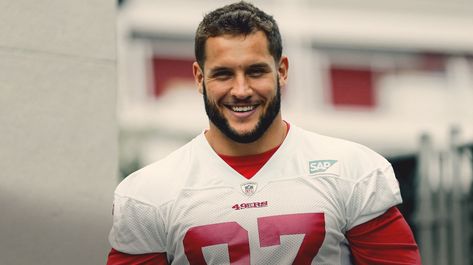 Nick Bosa Facts:
*He was born on October 23, 1997 in Fort Lauderdale, Florida, USA.
*His parents are Cheryl and John Bosa.
*He was named an ESPN Freshman All-American in 2016.
*He made his NFL debut with the San Francisco 49ers in 2019.
*Follow him on Twitter, Facebook and Instagram.