Nadine Nassib Njeim is a Lebanese actress and beauty pageant titleholder who crowned Miss Lebanon 2004 beauty pageant. She represented her country in Miss Universe 2005 in Thailand. She is known for her performances in the shows Abwab Al Ghaim, Ajyal, and Matloub Rijal. Njeim was born to a Lebanese Christian father, Nassib Njeim, and a Tunisian Muslim mother, Sameera Njeim, in Duris, Baalbeck, Lebanon. She has been married to Hady Asmar since 2012. They have two children. 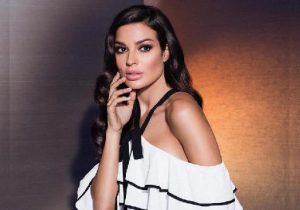 Nadine Nassib Njeim Facts:
*Her father is Lebanese Christian, while her mother is Tunisian Muslim.
*She started her career when she was 16 years old.
*She was crowned Miss Lebanon in 2004.
*She made her TV debut in 2008.
*Follow her on Twitter, Facebook and Instagram.