Comedian, actor and singer Eddie Murphy, who rose to prominence with his performance in Saturday Night Live (1980-1984). His notable film credits include Beverly Hills Cop,The Nutty Professor, Daddy Day Care, 48 Hrs., Trading Places, Norbit and Dr. Doolittle. He was the first actor to receive $1,000,000 for his first film. He played all the major roles in The Nutty Professor in 1996. Murphy was born Edward Regan Murphy on April 3, 1961 in Brooklyn, New York, to Lillian, a telephone operator, and Charles Edward Murphy, a transit police officer who was also an amateur comedian and actor. 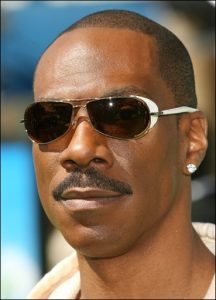 Eddie Murphy Facts:
*He began creating his own stand-up comedies when he was 15 years old.
*He doesn’t drink alcohol, smoke cigarettes and the only drug he takes is caffeine.
*He is a big fan of the TV series Jail. (2007)
*He hosted the MTV Movie Awards in 1993
*He is close friends with Jeffrey Katzenberg.
*Follow him on YouTube, Facebook and Google+.

“There’s this little box that African-American actors have to work in, in the first place, and I was able to rise above that box. I could have done a bunch of movies where I stayed as the Axel Foley or Reggie Hammond persona. But I didn’t want to be doing the same thing all the time. Every now and then, you crash and burn, but that’s part of it.” – Eddie Murphy