Nancy Sinatra is an American singer, actress, and the elder daughter of legendary crooner Frank Sinatra and Nancy Sinatra. She is best known for her 1965 signature hit “These Boots Are Made for Walkin'”. Nancy’s other notable recordings include “Sugar Town”, “Somethin’ Stupid” (a duet with her father), the title song from the James Bond film You Only Live Twice, several collaborations with Lee Hazlewood, such as “Jackson”, “Summer Wine” and her cover of Cher’s “Bang Bang (My Baby Shot Me Down)”. She has charted 21 times on Billboard’s Hot 100 chart, 10 times on the Adult Contemporary chart and twice on the Country chart. 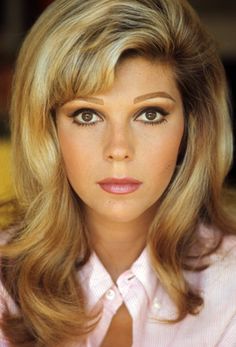 Born Nancy Sandra Sinatra on June 8, 1940 in Jersey City, New Jersey, she is the elder daughter of singer and actor Frank Sinatra and his first wife, Nancy Barbato Sinatra. Nancy attended and graduated from University High School in West Hollywood, California. She briefly attended the University of California-Los Angeles. She was married to Tommy Sands from 1960 to 1965 and Hugh Lambert from 1970 to 1985. She has two daughters named Amanda and Angela.

Nancy Sinatra Facts:
*She was born on June 8, 1940 in Jersey City, New Jersey, USA.
*She is the elder daughter of famous crooner Frank Sinatra and Nancy Barbato Sinatra.
*Older sister of television producer Tina Sinatra and singer, songwriter, and conductor Frank Sinatra Jr..
*Her parents divorced when she was 11 years old.
*She was a member of the close-harmony singing group, “The Tri-Tones” with Belinda Burrell and Jane Ross while in high school.
*She began her career as a singer and actress in November 1957 with an appearance on her father’s ABC-TV variety series.
*She began her recording career in 1961 with the release of her debut single “Cuff Links and a Tie Clip”.
*She and her father recorded the 1967 number one “Somethin’ Stupid”.
*Her cover of “Bang Bang (My Baby Shot Me Down)” was featured in the film Kill Bill.
*Visit her official website: www.nancysinatra.com
*Follow her on Twitter and Instagram.