Nani is a Portuguese professional footballer who plays as a winger for, and captains, Major League Soccer side Orlando City SC. He played for English club Manchester United from 2007 to 2015. He has played over 100 times for the senior national team. Although predominantly right-footed, he has been utilized on the left wing on many occasions. 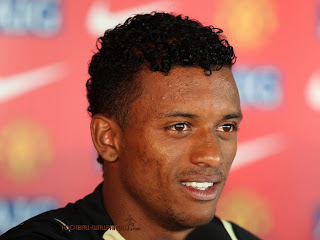 Nani Facts:
*Born on November 17, 1986 in Amadora, Portugal, he is of Cape Verde descent
*He has a total of 14 siblings (9 from his mother and 5 from his father), and was raised by his aunt Antonia.
*He began his career with local side Real Massamá in Lisbon, at age 14.
*He used to support Portuguese footballing giants Porto.
*He made his professional debut with the club in 2005.
*He became a member of Portugal’s national team in 2006.
*He joined Manchester United in 2007.
*He was named Manchester United Players’ Player of the Year in 2010.
*He is best friends with former Sporting Lisbon teammates Yannick Djalo and Miguel Veloso.
*He is close friends with Cristiano Ronaldo.
*He plays the piano.
*Follow him on Twitter, Facebook and Instagram.