Salt Bae is a Turkish chef, butcher, and restaurateur, who owns Nusr-Et, a chain of luxury steak houses. He became famous for his technique for preparing and seasoning meat. His restaurants became a must-visit for celebrities and athletes, including Maradona, Leo Messi, Paul Pogba, Ronaldinho, David Beckham, Manuel Neuer, Mesut Ozil, Kevin De Bruyne, Pierre-Emerick Aubameyang, DJ Khaled, Mehmet Oz, Diddy, Virgil Van Dijk, and Gareth Bale, among others. As of 2020, Nusr-Et has branches in Doha in Qatar; Abu Dhabi and Dubai in the United Arab Emirates; Ankara, Bodrum, Istanbul and Marmaris in Turkey; Jeddah in Saudi Arabia; Mykonos in Greece; Miami, New York and Boston in the United States. 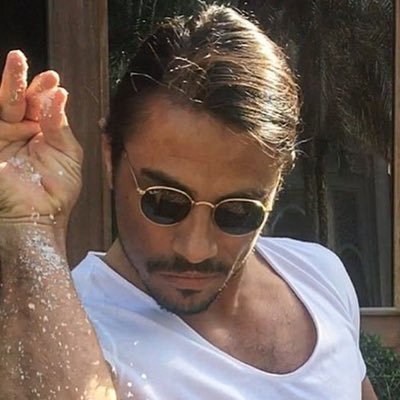 Born Nusret Gökçe on August 9, 1983 in Erzurum, Turkey, to a Kurdish family, his parents are Fatma and Faik Gökçe. Due to financial constraints of his family, Salt Bae left school at the 6th grade and started working as a butcher’s apprentice in the Kadıköy district of Istanbul.

Salt Bae Facts:
*He was born on August 9, 1983 in Erzurum, Turkey.
*His real name is Nusret Gökçe.
*He became an internet sensation when his flamboyant seasoning of a steak when viral.
*He created his own brand, Nusr-et Steakhouse in 2010.
*He received criticism for a 2016 photo posing in front of an image of Fidel Castro in December 2017.
*Barcelona legend Lionel Messi and Manchester United’s Paul Pogba made a joint visit to Nusr-Et’s Dubai location in November 2018.
*Visit his restaurant’s official website: www.nusr-et.com.tr/en/
*Follow him on Twitter, Facebook and Instagram.